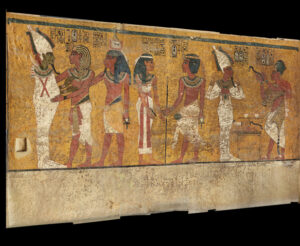 Facsimile of the tomb of Tutankhamen

In the years since its discovery, the tomb of the young pharaoh Tutankhamun emerged from obscurity to capture the public imagination. About 1,000 visitors enter the fragile sacred space each day, leaving behind bacteria and a thick layer of dust that is wiped off the sheet of glass covering the sarcophagus every morning.

The TNPI recorded the tomb of Tutankhamun and made public its data for scholars and conservators to monitor its conservation condition. The data was re-materialised as a facsimile to create awareness about the importance of non-contact conservation and sustainable tourism. 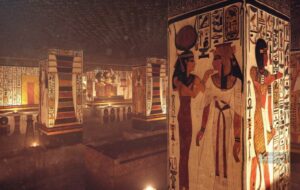 The Tomb of Nefertari

3D & VR of the tomb of Nefertari by Andrey Plaksin based on 4500 photos, with an overall volume of 15.3 GB in different resolutions, including rare archival images. Non-commercial, creative and educational project. 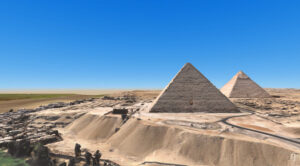 3D reconstruction of the Giza Plateau by the Giza Project at Harvard University. Contains models of several pyramids and mastabas as well as some virtual tours. 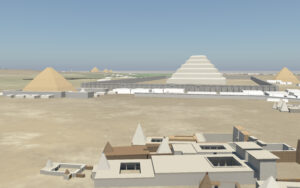 Constructing the Sacred: Visibility and Ritual Landscape at the Egyptian Necropolis of Saqqara
Elaine A. Sullivan

The long-lived burial site of Saqqara, Egypt, has been studied for more than a century. But the site we visit today is a palimpsest, the result of thousands of years of change, both architectural and environmental. Elaine A. Sullivan uses 3D technologies to peel away the layers of history at the site, revealing how changes to sight lines, skylines, and vistas at different periods of Saqqara’s millennia-long use influenced sacred ceremonies and ritual meaning at the necropolis. 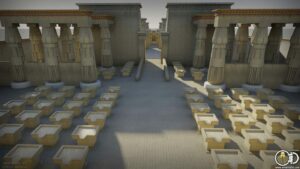 Personal research project into computer animation by Paul Docherty. The aim was to construct a virtual recreation of the main city complex of the ancient Egyptian city of Akhetaten, for use within a documentary style animation. The model was developed spanning different versions. 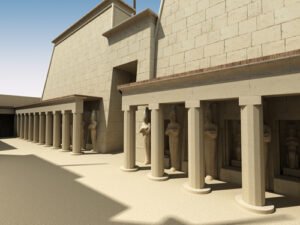 The colossal site of Karnak is one of the largest temple complexes in the world, with an incredibly rich architectural, ritual, religious, economic, social and political history. The Amun-Ra precinct, which includes an astonishing number of individual temples, shrines and processional ways, stands as a micro-cosmos of ancient Egypt.

The Digital Karnak Project was designed and built at the University of California at Los Angeles (UCLA) under the direction of Dr. Diane Favro (director of the ETC) and Dr. Willeke Wendrich (editor-in-chief of the UCLA Encyclopedia of Egyptology). 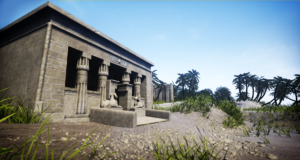 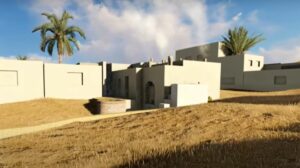 Bathing with the Romans (Karanis)

3D reconstruction as part of the URU Fayum Project carried out by ARCHiNOS Architecture with funding from the U.S. Ambassadors Fund for Cultural Preservation. 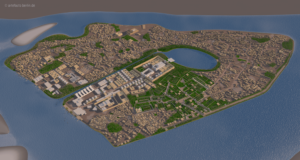 Qantir/Pi-Ramesse (House of Ramses) is situated in the Nile-Delta of Egypt, about 120 km northeast of Cairo. Between the 17th of December 2016 and the 18th of June of 2017 an exhibition titled “Ramesses – Divine ruler of the Nile” took place in Karlsruhe, Germany, in which an animation of the reconstruction of Pi-Ramesse was presented.

Personal project by digital artist Ancient Vine. Includes images of the Pharos and Library of Alexandria. 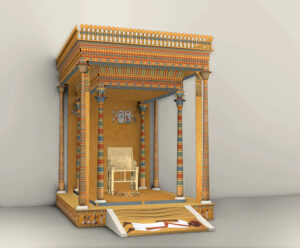 In 2016, Franck Monnier with the aid of Paul François took on the digital reconstruction of the palace of Malqata. They used state-of-the-art digital reconstruction technologies and 3-D software to create a platform to test various viewpoints of the site and to validate architectural and decoration presumptions. The resulting digital imagery also enabled researchers to produce different renderings, such as day and night views. While this virtual animation brings the site back to life, this computing power must not downplay the importance of the fundamentals of archaeological reconstruction. Documentary research and the cross-referencing of archeological data remain the foundation of such an undertaking. 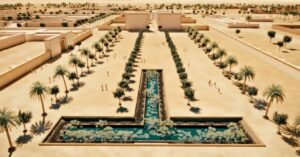 3D reconstruction by the company Archéovision for an exhibition in France about  the Amarna period. 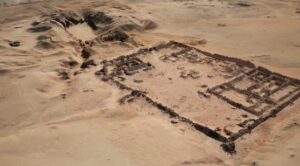 The Wadi el-Hudi Expedition is developing an immersive 3D model of the 46+ archaeological sites found in this region of the Eastern Desert. This makes use of the ground-based photogrammetric data gathered in previous seasons along with satellite-based photographs and digital elevation models to make a seamless walk-through of the archaeological areas of Wadi el-Hudi.