It is a truth universally acknowledged that I am the slowest gamer in the world. I like playing retro point-and-click adventures from the sweet nineties (found at gog.com) and I’m still determined to finish the 1999 Sierra classic Pharaoh at some point. So it’s no surprise that I only started playing Assassin’s Creed Origins years after its release in 2017, having first pawned a second-hand Playstation from my sister’s boyfriend. As an Egyptologist I started playing the game from a historical perspective, but soon found myself happily slitting the throats of unsuspecting Romans, involving a lot of button bashing and verbal abuse when they noticed me crouching behind a potted palm. I even got my sister to beat some of the harder bosses for me (boy, do I suck at arena fights) and spent many a happy Sunday afternoon exploring Luxor and various afterlifes in the Curse of the Pharaohs expansion, while my late mom was taking a nap (unperturbed by my violent swearing).

Recently I took on its successor Assassin’s Creed Oddyssey (2018), navigating Spartan blood feuds and Athenian politics, finding long lost relatives, hanging out with Herodotus and cavorting with Alkibiades (and a goat) at a symposium that would make Plato proud. I am playing as the strong female lead character Kassandra of course. I am only half-way through the game, with many Greek islands left to explore, so I have had no time to play Assassin’s Creed Valhalla (2020) yet. BUT, a new game is already on the horizon, Assassin’s Creed Mirage, set to be released in 2023. This time we follow Basim Ibn Ishaq to 9th century Baghdad, starting his career as a street thief in full-fledged Aladdin style. It will be a smaller game set in the golden age of the Islamic empire, but predating the actual historically existing order of ‘assassins’ that originated in Persia around the year 1090. The fortress of Alamut, which was a stronghold of assassin power, does appear in the game. 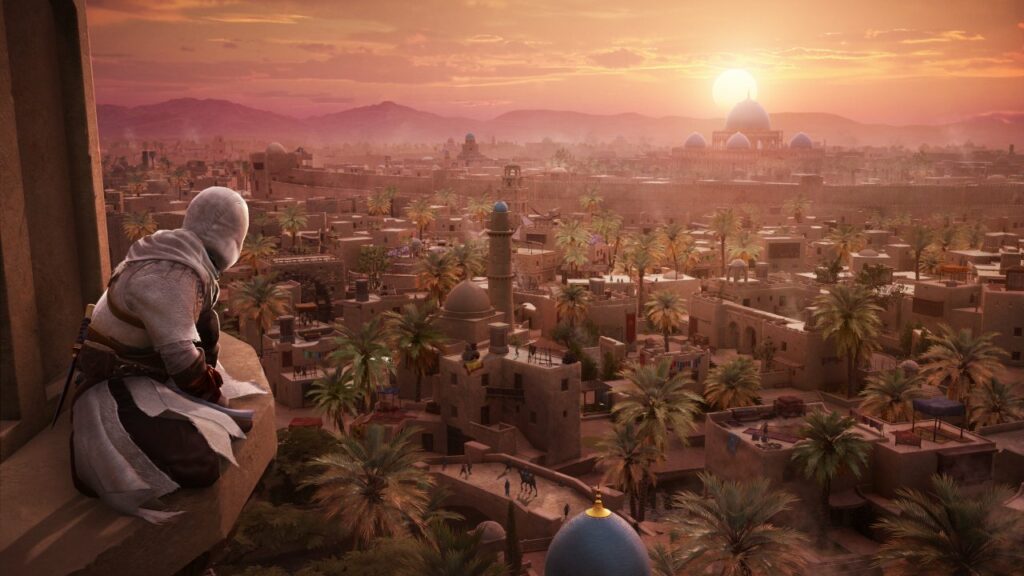 Another new game that can be wishlisted on Steam is Dynasty of the Sands, a city builder set in ancient Egypt developed by Rocket Flair Studios. From the in-game footage it looks a bit Atlantis-y and less historically correct than other games in the genre (Pharaoh (1999), Children of the Nile (2008) and Pharaoh’s soon the be remake A New Era), but who doesn’t like to build temples, tombs and pyramids along the Nile.

For the more Mesopotamian inclined there is Sumerians (2020) and Nebuchadnezzar (2021). I gather both games involve plenty of city planning, irrigation management and ziggurat building. If you’re an Assyriologist who’d like to review any of these games, contact me!

Archaeogaming is increasingly becoming a valid subject of Humanities research, such as the Playful Time Machines project by Dr. Angus Mol of Leiden University, studying how video games shape our experience of the past. They will be looking for prospective PhD students, so be sure to keep an eye out.

In the meantime, Dr. Jennifer Cromwell from Manchester Metropolitan University is preparing a volume on ancient Egypt in video games. She intives submissions on this topic, but be fast, as the deadline is end of September!